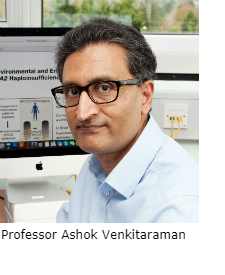 Congratuations to Professor Ashok Venkitaraman, Director of the MRC Cancer Unit and Ursula Zoellner Professor of Cancer Research, who has been announced as the winner the Basser Global Prize 2017. Each year the award recognizes a leading scientist who has conceptually advanced BRCA1/2-related research that has led to improvements in clinical care. Individuals with mutations in theBRCA1 and BRCA2 genes have an exceptionally high risk of breast or ovarian cancer.

Venkitaraman’s laboratory discovered that BRCA2 plays a critical role in repairing the human genome, and has been instrumental in showing how mutations in BRCA2 incite genome instability, accelerating cancer development. This work has provided the scientific basis for assessing cancer risk in people who carry different BRCA2 mutations, and for new treatments for cancers arising in these patients. Venkitaraman’s current research focuses on deeper understanding of how cancer is initiated in patients with BRCA2 mutations, in an effort to identify new opportunities for early, non-invasive intervention. His laboratory recently uncovered how certain chemicals found in the environment or made in the body can trigger genome instability in cells carrying mutant BRCA2.

“It is an honour to be recognized in this way by the Basser Center, which is at the forefront of efforts to improve the outcome of patients who bear BRCA1/2 mutations,” Venkitaraman said. “The Basser Global Prize will greatly enhance my laboratory’s ability to pursue promising new research avenues.”