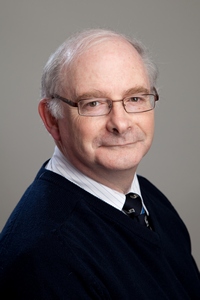 In some forms of motor neurone disease (also known as amyotrophic lateral sclerosis, or ALS) and frontotemporal dementia, there is a build up of ‘assemblies’ of misshapen RNA-binding proteins including FUS. These are distinct from conventional protein aggregates seen in Alzheimer’s disease and Parkinson’s disease and their significance has been unclear.

In a study published in Neuron, Professor Peter St George-Hyslop (Clinical Neurosciences) and colleagues in the Departments of Chemistry, Chemical Engineering and Physiology, examined the physical properties of FUS to demonstrate it can reversibly transition between monomeric, liquid droplet and soft jelly-like states.

Using the nematode worm C. elegans as a model of ALS and frontotemporal dementia, the team showed that this phase transition process becomes irreversible when FUS is mutated, forming hard fibrous gels that do not melt to liquid. These irreversible assemblies trap other factors, and one consequence of this is disrupted protein synthesis in axons. By inhibiting the formation of these irreversible assemblies (for example, by targeting with particular small molecules), it is possible to rescue the phenotype and prolong the worm’s lifespan.

Professor St George-Hyslop says: “We’ve shown that a particular group of proteins can regulate vital cellular processes by their distinct ability to transition between different states. But this essential property also makes them vulnerable to forming more fixed structures if mutated, disrupting their normal function and causing disease…understanding what is in these assemblies should provide further targets for disease treatments.”