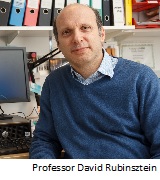 Dementia affects over 830,000 people in the UK and costs the UK economy £23 billion a year; it has been 12 years since the last treatment for dementia was licensed in the UK. Academic and health leaders from across the world have pledged a research ambition for a disease-modifying therapy for dementia by 2025. Each Institute will employ 30 new research scientists to fast-track the development of new treatments to achieve this.

Cambridge’s Drug Discovery Institute will be located on the Cambridge Biomedical Campus. It will be led by David Rubinsztein (Deputy Director of the Cambridge Institute for Medical Research) and will involve many members of Cambridge Neuroscience.

“The Drug Discovery Alliance is one of the first of its kind for dementia research in the world.” says Dr Eric Karran, Director of Research at Alzheimer’s Research UK. “It’s only by boosting the number of promising leads to follow-up, that we’ll have the best chance of developing pioneering medicines that can change the outlook of this devastating condition.”