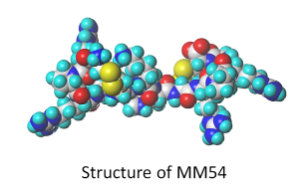 Glioblastoma are highly aggressive brain tumours that are associated with an extremely poor prognosis despite invasive surgery followed by concurrent radiation and chemotherapy. Malignancy is closely associated with their vascularisation and the interaction between glioblastoma-initiating cells that are similar to neural stem cells and endothelial cells, where a key signalling peptide, apelin, is highly expressed.

Apelin antagonists appear to suppress endothelial-mediated expansion of glioblastoma patient-derived cells with stem-like properties and suppress tumour initiation and growth. MM54 was safe and effective in lengthening the survival of intracranially xenografted mice, with no reported side-effects. Importantly in this model, MM54 is synergistic with the current therapy temozolomide, and may have the potential to be used synergistically with the standard of care