First I’d like to highlight two opportunities. The Rosetrees Trust is a medical research charity for which I chair a Scientific Advisory Board. This year it will award a £250,000 prize for an interdisciplinary project applying chemistry or physics to biomedical problems. Several institutions including Cambridge have each been given the opportunity to put forward […]

On Monday the Clinical School hosted a very successful visit by Michael Brown and Joseph Goldstein, who won the Nobel Prize for Physiology of Medicine in 1985.  The visit was organised by the Nobel Foundation, with the aim of inspiring young scientists.  Adam Smith from the Foundation explained that they have taken Nobel Prize winners […]

One of the most important aspects of the School of Clinical Medicine is its partnership with NHS organisations. In fact the Clinical School’s remarkable success since its formation in 1976 is largely due to the strength of these local partnerships. Two particularly important organisations to us are Cambridge University Hospitals (Addenbrooke’s and the Rosie) and […]

At the end of this month two key figures from the Clinical School are retiring – Paul Luzio and Ken Siddle. Steve O’Rahilly organised an excellent afternoon and evening celebrating their scientific achievements on Friday 19th. Steve opened the proceedings brilliantly by pointing out that rather than have individual celebrations that the Department of Biochemistry […]

I have now been in Cambridge for almost exactly two years.  Most of the time it feels as if I only arrived yesterday!  Three things that continue to strike me about it are the following.  First, the breadth and depth of scientific excellence across the Clinical School, the associated Institutions on the site including the […]

Willem Ouwehand recently held a very enjoyable celebration of completing 1000 Genomes for patients with rare diseases.  This is the pilot phase of the Prime Minister’s 100,000 Genomes Project.  It was held in the gardens at Trinity Hall and was a fantastic way of thanking the team who have succeeded in getting to this point.  […]

First, a date for your diaries. On 20th October the Nobel Foundation is bringing Joseph Goldstein and Michael Brown to Cambridge, and there will be a series of talks etc. here on the Biomedical campus. Brown and Goldstein won the Nobel Prize in Physiology or Medicine in 1985 for their studies on cholesterol metabolism. Their scientific […] 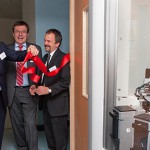 On May 26th I had a particularly busy day. First thing in the morning we had the formal opening of the Clinical Hyperpolariser Unit. This is a potentially game changing development led by Professor Kevin Brindle. Pre-clinical experiments performed by Kevin show that this has the potential to increase the signal to noise for detection of […]

You will all have heard a lot about Pfizer’s offers to buy AstraZeneca, and many people have asked me what this might mean for the School and for the Campus. I’m afraid that I don’t think it’s a cause for celebration. Over the last year or so I have thoroughly enjoyed working with senior people […]

You will all have heard a lot about Pfizer’s offers to buy AstraZeneca, and many people have asked me what this might mean for the School and for the Campus. I’m afraid that I don’t think it’s a cause for celebration. Over the last year or so I have thoroughly enjoyed working with senior people […]