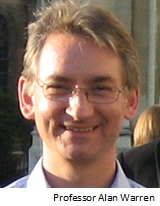 In a study published in Nature Structural and Molecular Biology, Professor Alan Warren and colleagues (CIMR) have revealed the basis of the rare inherited leukaemia predisposition disorder Shwachman-Diamond syndrome that arises from mutations in a highly conserved protein, SBDS, and linked this to other forms of sporadic leukaemia. Previously they had shown that SBDS is critical for removal of the assembly factor eIF6 during synthesis of the large (60S) ribosomal subunit but the underlying molecular mechanism remained elusive.

Now, Félix Weis and others in the Warren lab— together with colleagues at the University of Rennes and the LMB (David Traynor and Rob Kay)— have used the latest advances in single particle cryo-electron microscopy to directly visualize how SBDS mediates this late step in 60S ribosomal subunit maturation. Together with genetic and biochemical studies in yeast, this has allowed them to discover a fundamental and conserved quality control step during 60S subunit maturation that licences newly synthesized ribosomal subunits to enter active translation.

Importantly, the study also reveals a physical and functional interaction between SBDS and a ribosomal protein mutated in paediatric T-cell leukaemia, linking the pathogenesis of inherited and sporadic forms of leukaemia in a common pathway controlling maturation of the 60S ribosomal subunit. This therefore raises hopes that a single drug could be developed to treat both of these ribosomopathies.