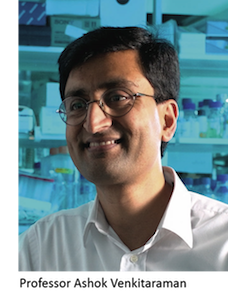 The KRAS oncogene is frequently activated by mutations in cancers (including 90% of pancreatic cancers and 30-40% of colorectal or lung cancers). However, it has proven extremely difficult to find new drugs that directly inhibit activated mutant KRAS.

The researchers have created a new class of potential drugs – Poloppins – which inhibit a key regulator of mitotic cell division, the polo-like kinases (PLKs). Poloppins do not inhibit the catalytic active site of the PLKs, but instead, target the protein-protein interactions that enable PLKs to engage their cellular substrates. Poloppins exploit the mitotic difficulties inherent in mutant KRAS-expressing cancer cells to induce their death during mitosis.
Poloppins not only selectively kill cancer cells expressing mutant KRAS in two-dimensional culture, as well as in organoids that mimic tumours, but also reduce the growth of KRAS-expressing cancers in an in vivo model. Poloppins show enhanced activity when combined with drugs that inhibit the c-MET receptor, which are already used in cancer therapy. Interestingly, cancer cells appear less able to develop resistance to the effects of Poloppins than to conventional drugs that inhibit the catalytic active site of PLK1. Together, these features suggest that drugs belonging to the Poloppin class have future potential for the treatment of pancreatic, colorectal or lung cancers, alone or in combination with other agents.

The creation of Poloppins exemplifies how vulnerabilities that occur early during the development of cancer can be exploited for cancer therapy. Moreover, Poloppins work by targeting the protein-protein interactions of kinases, illustrating a new strategy for drug development that offers potential advantages over conventional drugs that directly inhibit the kinase catalytic site.