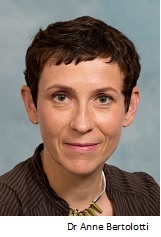 A team led by Anne Bertolotti, based in the MRC LMB and honorary member of the University Department of Clinical Neurosciences, have identified a new and safe approach to preventing neurodegenerative diseases in mice.

Damaged or ‘misfolded’ proteins represent a threat for cells and organ function. Species have evolved defence mechanisms to prevent protein aggregation. However, with age, these defence systems may degrade, leading to accumulation of misfolded proteins. In the nervous system, this results in the development of neurodegenerative diseases.

The group has discovered a small molecule that boosts the natural cellular defence systems and, in mice, this prevents damage resulting from protein aggregation. The small molecule has been shown to work in mouse models of two unrelated protein misfolding diseases, Charcot-Marie-Tooth 1B and amyotrophic lateral sclerosis – and without any side effects.

The small molecule has been named Sephin1 because it is a selective inhibitor of a holophosphatase. Before this study, phosphatases were thought not to be druggable, in contrast to kinases, which are popular drug targets. The discovery of Sephin1 could represent a novel therapeutic modality. The paper is published in Science.