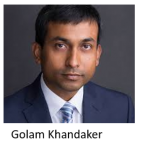 A study by Golam Khandaker (Psychiatry) and Stephen Burgess (MRC Biostatistics Unit) has identified potential reasons behind the comorbidity between depression and heart disease. It is known that it is not only people with heart disease that are more likely to suffer from depression but also that people with depression have an increased risk of suffering from heart disease. Published in Molecular Psychiatry the researchers studied data relating to almost 370,000 middle-aged participants of UK Biobank and identified inflammation, the body’s response to negative environmental factors, as the link between heart disease and depression.

While inflammation is a natural response necessary to fight off infection, chronic inflammation – which may result from psychological stress as well as lifestyle factors such as smoking, excessive alcohol intake, physical inactivity and obesity – is harmful.

The findings suggest that reducing inflammation could have a beneficial effect on mood and the heart. Dr Khandaker is currently recruiting people with depression for a clinical trial of a novel anti-inflammatory drug, called the Insight study.