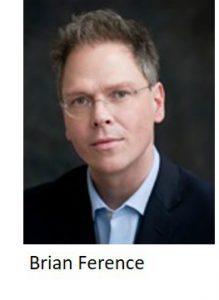 A study led by Brian Ference and investigators from the new Centre for Naturally Randomized Trials (Department of Public Health and Primary Care) identified that genetic variants that mimic the effect of ATP citrate lyase inhibitors and statins, appeared to lower plasma LDL cholesterol levels by the same mechanism of action. These results show that these cholesterol-lowering therapies were associated with similar effects on the risk of cardiovascular disease per unit decrease in the LDL cholesterol level.

The research, published in New England Journal of Medicine, is a companion to the Phase 3 CLEAR Harmony randomized trial, published in the same issue of NEJM, which uses genetic validation for a therapeutic mechanism of action, genetic target validation for the novel therapy Bempedoic Acid.

Using large-scale genetic epidemiological data and innovative quantitative techniques, the study represents a “naturally randomized trial” of the potential clinical efficacy and safety of lowering plasma LDL-C using ATP-citrate lyase inhibitors, which is a novel class of medicines currently in development.  The study is the first Mendelian randomization study that provides, in a single study, genetic validation for a therapeutic mechanism of action, genetic target validation for a novel therapy, genetic validation of the potential clinical benefit of therapies directed against that target and genetic validation of the safety of the novel mechanism of action.