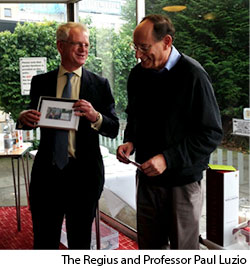 At the end of this month two key figures from the Clinical School are retiring – Paul Luzio and Ken Siddle. Steve O’Rahilly organised an excellent afternoon and evening celebrating their scientific achievements on Friday 19th. Steve opened the proceedings brilliantly by pointing out that rather than have individual celebrations that the Department of Biochemistry had come up with the original idea of “Better Together”; this was only a few hours after the results of the Scottish referendum vote were out. In another life Steve would have been an excellent comedy scripwriter. Over the course of the afternoon we heard from Graham Warren FRS (Vienna), Richard O’Brien (Vanderbilt), George Banting and Jeremy Tavaré (Bristol), Scottie Robinson FRS (Cambridge) and Pierre de Meyts (Belgium). I am not going to go over Paul and Ken’s scientific contributions here, but I do want to thank Paul for his extraordinary contributions as Director of CIMR until 2012 and as Deputy Head of the School from 2012 – 2014 and Ken for his superb leadership of the Graduate School of Life Sciences. We all owe them an enormous debt of gratitude. I am delighted to say that they will both be continuing to do research here well into the future.

On Monday 15th I welcomed 160 new clinical students to the Campus. In the middle of the day we had a photograph in front of the Clinical School. The photographer sets up across the road. It seems to get a little more challenging each year as the photos have to be grabbed between pedestrians, buses and cars passing in front of the camera! Although the morning had been particularly unpromising the sun broke through at just the right moment making for an excellent photograph. The enthusiasm of the students is palpable and I hope everyone in the School will seek opportunities to educate and inspire them.