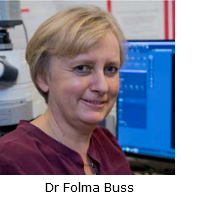 Reporting in Developmental Cell (Adobe PDF), Folma Buss (Cambridge Institute for Medical Research) has uncovered a new role for an actin-based myosin motor in ‘caging’ damaged mitochondria for their efficient removal. Cells have robust quality control mechanisms in place to detect damaged mitochondria, and quickly remove them via mitophagy. Defects in this pathway are linked to Parkinson’s disease (PD), highlighting its physiological importance.

The Buss lab found that myosin VI (MYO6) is recruited to damaged mitochondria by Parkin, an E3 ligase that is a known regulator of mitophagy and mutated in PD. This myosin drives the formation of F-actin cages around damaged mitochondria, which isolates them from neighbouring mitochondria, and ensures their efficient removal. In collaboration with James Nathan’s (CIMR) and Michal Minczuk’s labs (MRC MBU), they delineate the molecular mechanism of recruitment and show that defective mitochondria accumulate in the absence of MYO6. This suggests MYO6 function with Parkin is vital for cellular health and may have pathological significance.