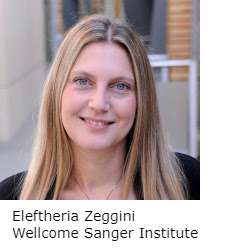 Scientists from the Wellcome Sanger Institute, led by Eleftheria Zeggini, and their collaborators, including Andrew McCaskie, Department of Surgery, investigated the genetics behind osteoarthritis, as well as the diseases and traits that are linked to it.

In the largest study of its kind, nine novel genes for osteoarthritis have been discovered. Results of the study,published 19th March in Nature Genetics, could open the door to new targeted therapies for this debilitating disease in the future.

To understand more about the genetic basis of osteoarthritis, the team studied 16.5 million DNA variations from the UK Biobank resource. Following combined analysis in up to 30,727 people with osteoarthritis and nearly 300,000 people without osteoarthritis in total – the controls – scientists discovered nine new genes that were associated with osteoarthritis, a significant result for this disease. The team looked for genes that were active in the progression of the disease by extracting the relevant cells from healthy and diseased tissue, studying the levels of proteins in the tissue and sequencing the RNA – the messenger that carries instructions from DNA for controlling the production of proteins. Of the nine genes associated with osteoarthritis, researchers identified five genes in particular that differed significantly in their expression in healthy and diseased tissue. The five genes present novel targets for future research into therapies. For the full press release click here.