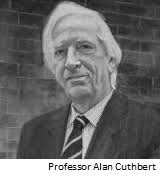 After his retirement in 1999 he joined the Department of Medicine and remained highly research active, publishing a first author paper just a year ago.

Details of a memorial service will be announced by Fitzwilliam College in due course.