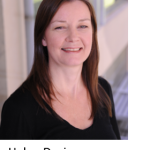 Helen Davies, from the Nik-Zainal group (both MRC Cancer Unit and Medical Genetics), has studied tumours derived from patients with a hereditary condition called CYLD cutaneous syndrome (CCS), in collaboration with Neil Rajan (Newcastle University). Patients with CCS develop multiple skin tumors over the scalp, face and body, called cylindromas and spiradenomas. While they are usually benign, their progressively enlarging nature can cause patients considerable distress.

Published in Nature Communications, the researchers comprehensively profiled the genomic landscape of 42 (mainly) benign tumors across 13 individuals in four multigenerational families. They found recurrent mutations in epigenetic modifiers DNMT3A and BCOR that are believed to drive tumorigenesis mechanistically through Wnt/beta-catenin pathway signalling. Furthermore, in CCS, pulmonary nodules have been reported that are thought to represent “metastatic” lesions from the skin although they are non-invasive and benign.

Confirming this peculiar phenomenon of benign metastases, the academics show that the benign lung tumors are indeed phylogenetically related to each other, sharing over a thousand mutations in common, verifying that they are indeed metastatic from a shared primary. Crucially, the shared mutations showed mutational patterns of ultraviolet damage reinforcing that the primary tumour was likely to be of sun-exposed cutaneous origin.