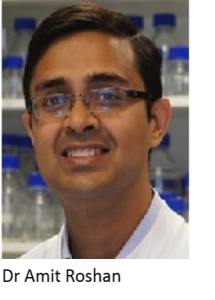 Congratulations to Dr Amit Roshan (Department of Plastic Surgery / Former Cambridge Cancer Centre-CRUK Research Fellow) who has been elected as a Hunterian Lecturer to the Royal College of Surgeons of England for 2017. This award is in recognition of his work on keratinocyte stem cell behaviour in the skin while working with Dr Phil Jones at the MRC Cancer Unit.

The Hunterian Lectures are given in the honour of John Hunter, widely regarded as the father of modern Surgery. They were founded under the Hunterian Trust, by which the Hunterian Collection was delivered to the Royal College of Surgeons of London at the end of the 19th Century and form the basis for the Hunterian Museum at the college. They continue to be highly regarded and prestigious awards within the field of surgery and are awarded annually in stiff competition.

Amit will deliver a talk entitled “Deciphering keratinocyte behaviour in real time in human skin: implications for wound healing and skin cancer” in 2017, and will be awarded a College medal upon delivery.