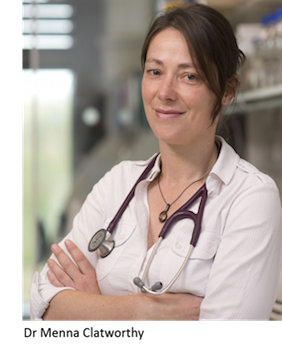 The kidneys play a critical role in cleaning the blood and controlling the body’s water balance. Unfortunately, their function can be affected by a number of common diseases that can be life-threatening, including infection. Lower urinary tract infections (UTIs) are among the most common human bacterial infections, but extension to the kidneys is rare – largely attributed to mechanical forces, such as urine flow, that prevent the ascent of bladder microbes. However, in a recent publication in Cell, researchers led by Dr Menna Clatworthy (Department of Medicine), have shown that high levels of salt, required for the kidney’s urine-concentrating function, in the renal medulla create a defence zone with enhanced antibacterial immunity against uropathogenic Escherichia coli (UPEC).

The researchers, including PhD student Miriam Berry assisted by post-docs Rebeccah Matthews and John Ferdinand and other members of the Clatworthy laboratory, sought to characterise kidney-resident immune cells. Dr Clatworthy and colleagues studied cells isolated from donated human kidneys that were deemed unsuitable for transplantation. The renal medulla, an extremely hypersaline environment, is among the first regions encountered by bacteria ascending from the bladder. Higher numbers of monocyte-derived macrophages were found in the medulla compared with the cortex, their recruitment orchestrated by chemokines produced by tubular epithelial cells in response to the high salt environment. The medullary mononuclear phagocytes (MNPs) also overcame UPEC infection more effectively than cortical MNPs because the hypersaline environment enhanced their phagocytic and bactericidal function.

During dehydration, physical conditions favour infection owing to reduced urine flow, with less mechanical propulsion of bacteria away from the kidney. However, this new data suggest that, in these conditions, the heightened salt levels in the medulla ensure that local antibacterial defence is at its most efficient. This reveals a unique mechanism afforded by the homeostatic function of the kidney where changes in the local environment orchestrate tissue defence.

“By utilizing the environmental signal required for urine concentration to generate a defence zone, the immune system reinforces the most vulnerable region of the kidney when it is at greatest risk,”explains Dr Clatworthy. “In the future, this understanding might enable us to harness useful kidney functions to develop better therapeutic strategies, reducing the frequency of UTIs or potentially preventing kidney failure.”