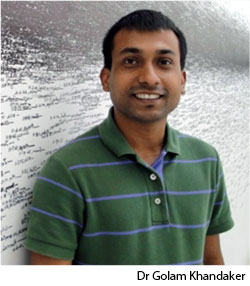 Children with higher blood levels of a protein associated with inflammation and infection are at greater risk of developing depression and psychosis in adulthood according to new research, published in JAMA Psychiatry, which suggests a role for the immune system in mental illness.

When we are exposed to an infection our immune system fights back; during this process, immune cells flood the blood stream with proteins such as interleukin-6 (IL-6), an “inflammatory marker”, which rises in response to infection and falls back to normal physiological levels when the illness subsides. Research led by Dr Golam Khandaker and Professor Peter Jones in the University department of psychiatry studied a sample of 4500 individuals from the Avon Longitudinal Study of Parents and  Children birth cohort: blood samples were taken at age 9 and then followed up at age 18 to see if the children had experienced episodes of depression or psychosis.  Higher serum levels of IL-6 at age 9 were associated with increased risk of depression or psychosis at age 18 in a dose-response manner; children in the top third of IL-6 distribution in childhood, compared with those in the bottom third, were nearly twice as likely to experience depression or psychosis later in life. This was found in boys and girls and did not depend on things like infection at the time of IL-6 measurement, body mass index, social class, ethnicity, and family history of depression.

Dr Khandaker said “Our immune system acts like a thermostat, turned down low most of the time, but turned up when we have an infection.  In some people the thermostat is always set slightly higher, behaving as if they have a persistent low level infection – these people appear to be at a higher risk of developing depression and psychosis.  It’s too early to say whether this association is causal but we are carrying out additional studies to examine this association further.”

Prof Jones said “People with depression or schizophrenia have a much higher risk of developing heart disease and diabetes that may contribute to premature deaths. Elevated levels of IL-6 over the life course may contribute to common causes for mental and physical disorders, underlining that we not only have to think of the mind in the brain, but also the brain in the body if we are to understand these conditions.”

For more information on this research: