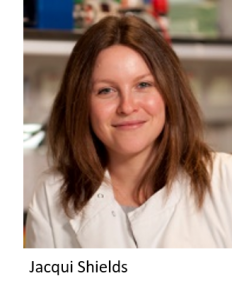 Cancer cells are surrounded by a diverse range of “normal cells” known as the stroma. The stroma includes immune cells, endothelial cells, fibroblasts and the extracellular matrix scaffold they produce. Together cancer cells and stroma form the tumour microenvironment. Crosstalk between the tumour and stroma is critical to help a tumour form and grow, but the complex relationships that exist within such a rapidly changing microenvironment remain unclear.

Researchers led by Jacqui Shields (MRC Cancer Unit) collaborated with Sarah Teichmann (Wellcome Trust Sanger Institute) to use single cell RNA sequencing (scRNAseq) to resolve stromal heterogeneity at the single-cell level, and to characterize how the function of stromal cells is temporally regulated during carcinogenesis. In a paper published in Cell Reports, they showed that immune cells enter the tumour in a naïve state, where they are educated to develop immune suppressive functions. They also identified the existence of fibroblast populations with distinct functions; immune regulatory, desmoplastic (laying down and remodelling extracellular matrix) and contractile. Contractile populations dominated in later, more established tumours. However, fibroblasts with immune regulatory function were prevalent at earliest stages of tumour development examined, producing factors to attract immune cells and change their function.

The researchers characterised the changing stromal landscape within a developing tumour microenvironment and associated lymph nodes in real time. This allowed new insights into the populations, dynamics and interactions occurring in order to meet the changing requirements of a rapidly growing tumour. Through employing further innovative techniques, they were able to identify potential interactions across stromal and immune populations to predict interactions that support tumour growth. They used these predictions to disrupt specific interactions between fibroblasts and macrophages in preclinical cancer models, and showed a slowing of tumour growth. All data is freely available online.

The results highlight the power of scRNAseq to identify complex interplays and increasing stromal diversity as tumours develops, and serve as a resource for identifying candidates with therapeutic potential. This sets the foundation for further investigation of stromal kinetics in human tumours to develop potential patient stratification approaches and identification of novel stromal focussed-therapeutic strategies.