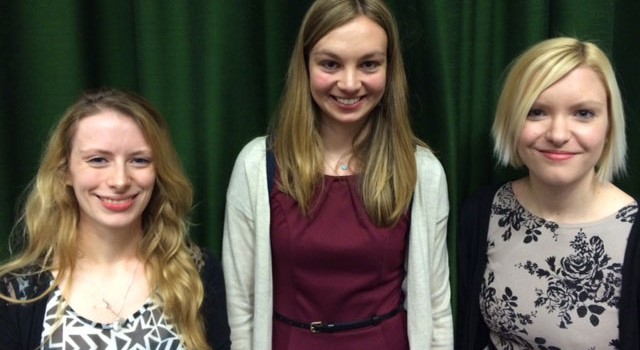 The annual clinical students’ Elective Presentation Grand Round took place on Wednesday 8th January.  In 2013, 162 students travelled to 41 different destinations across five continents, ranging from some of the most resource-poor nations on earth to first world countries, including a significant number of projects here at home in the UK.

Three students were chosen to win Elective prizes and we were treated to some outstanding presentations (from left to right on the photograph) Layla Buckham, Olivia Lucas and Danielle Murrell.

Layla travelled to rural Rajasthan, one of India’s poorest provinces, where she undertook a qualitative research study to identify ways in which healthcare delivery might be improved to remote rural villages, achieving the seemingly impossible by travelling as a lone female in a culture where this is not normal practice and carrying out focus groups and interviews via a translator.  Olivia went to the NIH in Maryland, where she pursued her interest in academic medicine with a laboratory project in Immunology, gaining interesting and potentially important results in a very short space of time. Danielle combined her interest in clinical neonatology with a laboratory research project in respiratory medicine at the neonatal unit in Southampton, where she was also allowed an extraordinary amount of hands-on clinical experience with tiny, sick babies. The quality of all three presentations was superb and each student demonstrated not only their interest in and enthusiasm for their chosen subjects, but also fascinating insights into their personal reflections on their experiences.

Other winners were Jeremy Sharman, who was awarded the Addenbrooke’s Abroad prize for an elective in a resource-poor country following his elective in Nepal. The winners of the Elective Photography prizes were Malgorzata Orzechowska-Redmond, Heather Reynolds and Adam Whyte.