The metabolite itaconic acid, produced by mitochondria in macrophages during inflammation, activates the anti-inflammatory response by activating the stress sensor NRF2.

A project jointly led by Luke O’Neill at Trinity College, Dublin and Mike Murphy at the MRC Mitochondrial Biology Unit has recently been published in Nature. 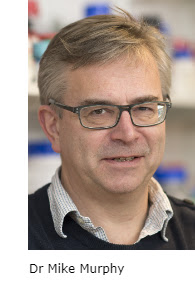 Inflammation occurs when cells in the immune system respond to infection or tissue damage. In earlier work from the O’Neill and Murphy labs, published in Cell in 2016, it was shown that mitochondrial metabolism was reprogrammed in macrophages during inflammation to enhance production of the metabolite succinate, which allowed the cells to respond to infection. The problem remained of how the activation of inflammation was switch off once the infection had been dealt with or the tissue damage repaired.

In this new Nature paper O’Neill and Murphy, along with Christian Frezza at the MRC Cancer Unit and Edmund Kunji at the MBU, show that the metabolite itaconic acid is produced by mitochondria in macrophages during inflammation and serves to switch on an anti-inflammatory programme by activating the stress sensor NRF2. This work has implications for a number of inflammatory disorders and also led to the development of itaconic acid derivatives as potential anti-inflammatory molecules.