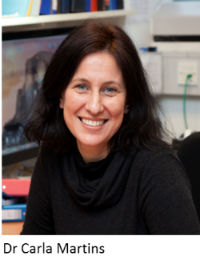 Lung cancer is the leading cause of cancer related death worldwide due to its high incidence rates and limited effectiveness of available therapies. Approximately half of lung adenocarcinomas, the most common type of lung cancer, harbor mutations in a gene called TP53(p53), a key player in the body’s in-built defence mechanism against the development of cancer. p53 is the single most commonly mutated gene in human cancers – and one of the most appealing cancer therapy targets.

However, as mutant p53 proteins cannot currently be targeted in the clinic, alternative targeting strategies aimed at these tumours are required. To identify mutant p53-dependent therapeutic vulnerabilities in lung tumours, Dr Carla Martins and her colleagues at the MRC Cancer Unit studied the transcriptional, metabolic and cellular characteristics of lung tumour models harboring distinct p53 deficiencies, namely complete loss of p53 (Null); mutations that cause loss of p53 contact with DNA and mutations that alter the correct conformation of the protein.

This study, published recently in Genes and Development, shows that p53 restoration therapy, which is currently under development, is equally effective in p53-null and mutant lung tumours, demonstrating the potential of this therapeutic approach even when p53 mutations are present. On the other hand, the authors also found that each p53 deficiency drove unique gene expression signatures that can in turn lead to mutation-specific vulnerabilities. In particular, they found that tumours with p53 contact mutations were sensitive to treatment with the cholesterol lowering drug Simvastatin, but this sensitivity was not observed in the other two p53 deficient tumour cohorts. Importantly, the authors identified a similar p53-mutation type specific gene expression signature in human lung tumors. This raises the exciting possibility that these specific subsets of lung cancer patients may profit from statin repurposing as a cancer therapy.