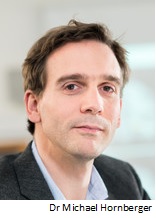 Dr Michael Hornberger (Clinical Neuroscience) and his team are starting a pilot trial to investigate whether a hormone produced naturally in the brain could help reduce the symptoms of a certain type of dementia. Frontotemporal dementia (FTD), which affects about 16,000 people in the UK, can cause distressing symptoms such as loss of empathy and inappropriate behaviour.

The current trial will recruit people who carry a gene known to cause a genetic mutation that can lead to FTD. The plan for the pilot trial is to investigate the effects of the hormone oxytocin – sometimes known as the ‘bonding’ hormone – which is produced naturally in the brain, and has been linked to social bonding and feelings of empathy. The aim is to find out if this hormone can increase empathy and social awareness in people with FTD, helping to combat their challenging behavioural symptoms. If the initial results are successful, the team plan to carry out wider trials in the future.